Hey, my stats are booming!

At least that’s what WordPress told me a few times over the past days – apparently the most viewed count went up from 82 to 139 on the 19th, and generally the amount of people who visit my blog (and the amount of times they click on stuff) increased a good amount. Not too bad I guess, but now I’m almost sad that I didn’t get to take more and better pictures when we were at the gamescom, since so many people show interest for it.

But I guess I can only keep that in mind and do it better next year. Especially since I’m going to know my camera a whole lot better by then than I do now. At least for now we’re definitely planning to go again already. And if we’re really crazy and my gamer friend isn’t just joking but actually serious about going to Blizzcon.. Well, I can imagine that would interest a lot of people eventually. We’ll see! Maybe I should actually get serious about making a cosplay, too..

I actually went to Gamescom! *_*

A friend only came up with the idea like two or three weeks before it started, so it’s not like we were prepared or anything. The tickets had to be bought on eBay, and the way on the train was.. well, supposed to be long and boring. But since we had to get up at 2:00 in the morning to catch our train and I only got one hour of sleep before that (not my fault, I got woken up and couldn’t fall asleep again.. -_-) I pretty much spent the travel time being grumpy and awfully tired.

To top it all of we got stuck on a train that had to wait out some technical troubles, together with drunk football fans who were on the way to cologne as well. Not one of the nicest trips I’ve ever been on – an intoxicated group of chanting, bawling and shouting people waving flags around and blasting repetitive music occasionally don’t exactly fit into my idea of acceptable travel companions. And since they had the same destination, we kept bumping into them on train stations and in train compartments.

In the end we did survive, and looking back I’d say it was worth it. We saw some awesome cosplays, but I still couldn’t take many pictures – a lot of people in costumes somehow thought it was a good idea to hang around in the darker halls to pose and show off for everyone with a camera. Needless to say that didn’t work out so well. And the rest wanted to go around and have a look themselves of course, so there just weren’t many opportunities. In the better lit cosplay area we saw Eir Stegalkin and a Pool Party Ahri (at least that’s what I think who they are):

Besides the lack of good lighting in most places, taking pictures was also made harder by the loads of people who didn’t care or notice and kept walking right in front of the camera, and by a lot of constantly moving cosplayers too – I’m guessing they wanted to get some good poses for the cameras, but eventually ended up moving around constantly. Not to mention the photographers (the ones using small digital cameras or iPads and the likes included) who would simply walk in front of others without any courtesy to get a better view themselves.

We managed to see the cosplay contest of League of Legends, which mainly consisted of different versions of Janna, Nidalee, Annie, Katarina, Riven, Syndra, Leona and Jinx. Weirdly enough, most of the male cosplayers actually came as female characters as well – and there was a ‘female Tryndamere’ where I’m pretty damn sure it was actually an Arthas cosplay. With Frostmourne and all. But I guess there’s no need to make a new costume if you can simply recycle an old one..

After the show was over they started throwing some Teemo hats, Poros and Ziggs bombs in the crowd, but sadly I was far too way back in the crowd and had to protect my camera from thrown objects and all the jumping people, so I had no chance of trying to catch a Poro. Guess I’ll have to invest into some Poro Snacks for next year. 😦

But anyway! I can’t really say much about the other stuff since we didn’t have enough time by far to see everything, and we didn’t even get to check out the blizzard stuff at the Gamescom – kind of a shame, because Blizzcon is definitely too far away to visit – but for next year we’re already planning to visit again. And for more than one day this time! 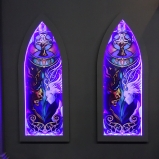 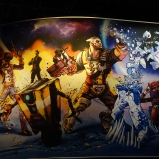 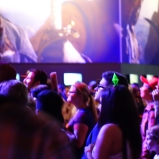 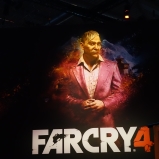 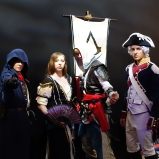 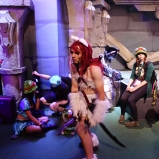 Well, I made it through the whole week without playing, but on Saturday I finally added a new subscription and got some more gaming time. Seems like I’m a little addicted to WoW all over again, after all this time.. and that’s just from the fun of levelling a new character that I love, once more.

The only bad point about it at all is that I currently have to share a computer with someone else, so we have to take turns to play something or even just to browse internet stuff.. And the rather uncomfortable keyboard where nothing is how I’m used to it at all. Even important letters are missing!^^ Making a blog post is pretty weird, I’m completely not used to how everything functions, stuff works so differently than on my own computer.. that’s the reason why I’m not being very productive with my posts at all. o_o

Despite these just a little uncomfortable circumstances (typing really is hard if you have to look for the right keys all the time!) I finally made it to level 60 on my hunter over the weekend and am going to proceed swiftly towards 90, hopefully. The ability to fly really makes everything so much easier..

Oh well, at least I figured out most of my user names and passwords, so I guess I might do some more writing during the next week than over the past one. 😀